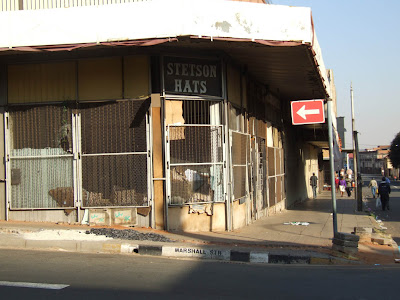 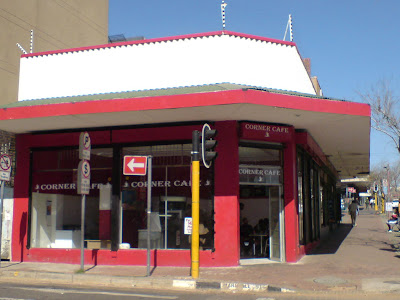 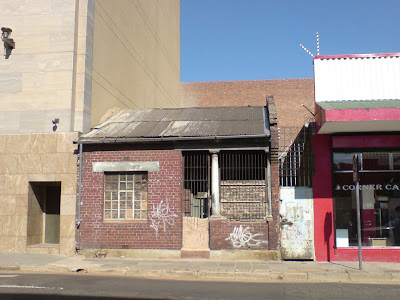 I intend to fully update this site with new pictures in 2009, so keep checking back!
Posted by The Real Realist at 9:18 PM

joeys was my city too and so sad to see what has become of the city, the brow and yeoville.
the shame of the anc? not likely! mandela promised everyone a proper place to live in, and more than ten years on........ nuffink! the guys at the bottom of the pile have even less than what the nats allowed. the only people to have prospered have been anc cronies.

~PakKaramu~ said...
This comment has been removed by a blog administrator.
5:46 AM

LOL - Thanks for the laugh, that picture made my day. Have standards dropped that much in South Africa ? To think that a lick of paint improves the standard of a building is ridiculous but then to imagine that it improves an entire area is simply ludicrous. It also goes to prove that electric fencing is part and parcel of South Africa's architectural identity.

I am not surprised to see that maintenance is still not part of the "new" South Africa's vocabulary, could the powers that be spare a lick of paint and re-paint the name of the street or is that too much to ask - lol.

I wouldn't worry too much about the idiot that sent you the pics, he or she is probably un-skilled, trapped in a city that he or she doesn't want to be in and therefore tries to justify their existence there and/or suffers from delusions of grandeur.

hi there - am linking to my site about the insisters from 80's jozi ... would be extremely grateful for a link back, but no probs if you don't wanna. am going to link to you in a post about rockey street and on the blogroll.

I was glad to have found your blog and the pictures you took of Jo'burg spoke volumes. I'm originally from Pretoria and I'm sad to say, the mid-city district there is following Jo'burgs' lead in this way too.
Well done on the pictures. The world outside has to see this, specially any tourists thinking of going to SA.
Liezel

I was born and grew up in Yeoville (started at the OLD Yeoville Boys' in 1961). Mamas (proper name La Lanterna) was on the corner of Cavendish and Rocky, not Raymond. Before becomeing a restuarant it was Phil's Cafe. It was half a block up from the Piccadilly and opposite Scotch Corner.

My oh my.. The real is back!
Nice to read your writings again.
Having voted with my feet, I'm situated in little Denmark.
Alwayr room for a white saffer passing by my farm here. Cannot promise you tripe though, but good boerekoos.
Sincerely
bedrichvanalten at yahoo dot com

I'm from the US and just visited SA and Joburg for the 1st time this past month. The Cape Town CBD is still in much better shape, but have it be known, I was still mugged at Long Street at night and had to pay a prostitute ransom to get my wallet back, but never recovered my camera.

Keep up the great blogging - I look forward to seeing how Johannesburg looks in 2009!

Can't wait to see some new pics. Just wanted to let you know that your link to South Africa Sucks is to the old closed down site, not the new zasucks.com

This is what happens anyplace in the world where these uncivilized boons show up. They just don't have the IQ and/or disposition to carry on a first world type of existence - UNLESS there are enough whites left to prop them up. It is obvious who is in majority control in SA now - and it sure isn't European descendants.

I stumbled onto your blog as I used to have a South African friend and was curious about the country itself :)

I think all you guys are chickens for running away from South Africa. Most of us that are left here are enjoying ourselves and have chosen to stay here because we love our country. Why go and take some lousy photos and then make a scene about it. 99% of South Africa is still beautiful.
Julle is maar net 'n klomp moffies.
Whats the bet the countries that you stay in now also have run down areas. SA is beautiful and most of the Blacks here are nice hard working people. It just a handful (as well as in the other races here including whites)of blacks who are giving SA a bad name, including all of you moffies.

You should web google "Detroit Ruins" and see how the same savages summarily destroyed the City of Detroit,Michigan USA. Once a city of 2,000,000 white residents in the 1940's, "motown"became a 95% black city of 1,400,000 by 1970. According to the 2010 US census, population is now under 700,000. 40 square miles of vacant city block after block. Vast areas reclaimed by forest and praire. Vast 50 story skyscrapers vacant and crumbling. Detroit is America's Acropolis! The black mayor Mr Bing is ordering the demolition of thousands of beautifull buildings, in order to prevent whites from moving in to renovate and gentrify. Thats right. They'd rather destroy Detroit rather than have whites renovate and move in! Only the Hispanic white ethnic Mexican area in southwest Detroit is preserved, just like when Detroit was white. Blacks have tried to movve in,but the" racist" hispanics wont let them in. lol. Joes is heade the same way,for the same reason....the original whites who built these places were replaced by blacks ,who destroyed it. See" march of the titans" (history of the white race) look up Detroit section.

It's embarrassing to see generations of otherwise intelligent, well educated, well meaning men and women struggle, despite all the blatant evidence against them, to prove there are, other than skin color and shape, absolutely no significant differences between blacks and whites.

I have relatives that stayed in South Africa and "Rhodesia" when the rest of us emigrated, leaving for North America. Something about the differences between blacks and whites rings true here (in Canada and the US) just as it does back home. I've done my very best to remember and be as objective as possible.

1) Blacks seem to want something simply because someone has it and they haven't. They might not even know what it is, how it works, what it's supposed to do. They get it, they're unable to understand or find the same value others found in it and they toss it aside. Cars, houses, yards, jobs, spouses, children, education, rights, freedom, cities, countries and continents.

2) It seems blacks are unable to comprehend value except in having more than, having lots, not through scarcity, rareness, uniqueness. To whites, there often seems to be more gratification through those intangible qualities; to blacks, there more often seems to be gratification through volume, through having what those in power have and being sure it's generally well known they have it.

3) Blacks seem not to appreciate, to nurture, to persevere, to value what's to come, what's unknown and what they might not understand. Education is a perfect example. Contrasted with many, likely the majority, of Asian immigrants to North America, blacks often seem not to comprehend there is a value--to them--in the future benefits of education. On the other hand, many
Asians--Chinese, Japanese, Filipino, Korean--sacrificed everything, EVERYTHING, to make a dangerous journey, sometimes as indentured servants, to an unknown land not even to educate themselves, but the lives of possibly their children and definitely their grandchildren and great-grandchildren. Some, the Japanese, were even rounded up and put in relocation (concentration) camps. US citizens since birth, never even having visited Japan, they lost everything, again, and started over, valuing education, thrift and possibilities. Intangible but more valuable than anything material.

We were warned about this and it's very, very true: Do not throw your pearls before swine!

I used to work in the ACC building back in 1995 - 1998. We used to lunch at the Marshall Inn and walk up the the public library on a Friday. Amazing how things have changed.

Were you mugged by a negroid? Just wondering University student?

Carol you need to wake up!!! Negros hate you and all who look like you. They will destroy all that is good around them. It is in their genetics. Look at Detroit, Camden, Chicago, the congo, sierra leone and sadly SA. All the white SA farmers and their children slaughtered by sub human negros??? Move to Australia while you still can!!!