A Tour Through Hillbrow Part 5 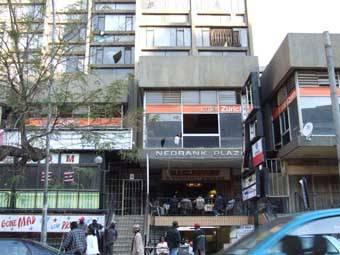 Above: The Nedbank Plaza and the ruins of the Cafe Zurich, formerly a great late night hangout which used to serve the most wonderful Black Forest cake... Pretoria Street, Hillbrow. 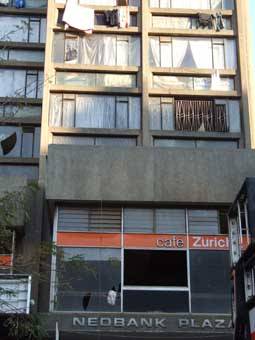 Above: The gutted ruins of the Nedbank Plaza and the Cafe Zurich, Pretoria Street. 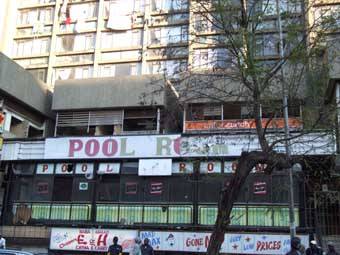 Above: The Ruins of Cafe Zurich, Pretoria Street, another view. 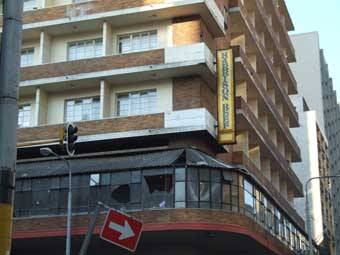 Above: The Harrison Reef Hotel....or what remains of it, rather. 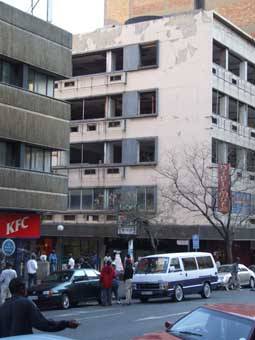 Above: The entrance to the Highpoint "shopping centre" on Pretoria Street, as it looks today. Note the totally gutted building on the right. This seems to be a common pattern throughout the area. 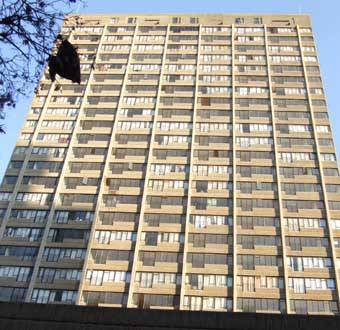 Above: The Highpoint apartment block: back in the 1980s, it was the place to stay -- if you had an apartment there, you really had arrived. Very popular with the rich students at Wits University, it was... 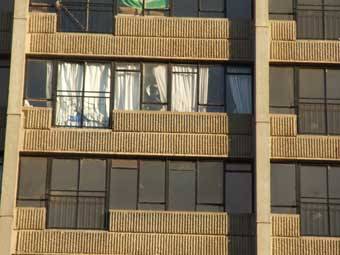 A close-up of a few of the windows in Highpoint today.
Posted by The Real Realist at 8:57 PM

I cannot believe it. It is like a country in darkest Africa. Unbelievable

Yer better believe..ALL THOSE PROMISES DOWN THE DRAIN...TIME IS AN UGLY THING...IT SHOWS AFTER A WHILE..AND ALL THE SHIT COMES OUT INTO THE OPEN....

Lekker. I see that KFC is still going. I wonder how many times that place has been robbed and how many staff have been shot. I won't tell you what KFC stands for though.I might be arrested. I will give you a clue. "Kill another Fucking ......

In answer to your question about what happened to Peter Rose, He died in 1990 and is sadly missed especially by me, his son Tony Rose

jesus this is sad to see.

In 1982 our European student friends and I being on a 3 months IAESTE internship spend nights in Cafe Zurich watching the soccer worldcup 1982 on videos "organized" from the Telekom guys at Hillbrow tower (which was the TV satellite hub those days for southern africa, despite the fact that SABC could not show the worldcup). Sad to see Cafe Zurich in that condition. What happended to Cafe Wien ???? Gruß from Munich Germany, Matthias Popp

Also destroyed, a gutted shell. Cafe Wien was actually my favorite, I used to often go there for the Black Forest cake.

There was a bomb blast in 1987 wherein two boys were severely hurt. I know the story was reported in the paper but I can't find any information on the bomb blast. Can someone point me in the right direction.

My sister was the owner of Cafe Zurich in 1987 when it was blasted by an ANC bomb. Both my nephews were critically injured and she was rife with shrapnel. I am trying to find the newspaper article which reported the incident. There was a picture of one of the boys being carried out on a stretcher. Can anyone help me?

i remember the student night club in highpoint

I lived in Hillbrow (Highpoint) from 1984 onwards and loved every minute. The "Goblet" was my place to be and the 24th Floor of Highpoint was my shelter. I get sick if I see this now.
Whatever happened to good old South Africa.....! Fortunately I moved away in time.

Wow its like what happens when a country is run by blacks, ohhh wait i just checked on wiki seems as though it was once run by whites that for some supid reason totally gave up.

well lets face who in their right mind didnt see this coming, lets not act surprized.

When I see what has become of my beloved country, I cry.

At least you can get some Kentucky Fried Chicken at the shopping center.... You couldn't have that in the 1980's!

I used to live in Highpoint from 1983 - 1989 at it was pure joy. The Goblet downstairs, the toasted chicken mayonaise after a night on the *jol*. I had my flat on the 24th floor, overlooking the north of JHB. It breaks my heart to see Hillbrow in slumps, but I guess the pigs enjoy it that way today!! No one can take my memories away from me! I was back in JHB in Nov 2007 and did not DARE go through Hillbrow. I am glad I have left RSA, its a shamble

LOL, i love how the only thing that withstood the black plague is the KFC.

I saw a similar picture from the u.s once.

My family were made to leave S Africa in 1985 for reasons unknown to us. I used to sing in the chandelier room of Harrison Reef Hillbrow I was devastated to leave but now looking at the photos,I think the government did us a favour. How sad it all is! kat

Its time to get out the dynamite

Would anybody be able to tell me who i can contact to get permission to use the 2 photos of the Cafe Zurich. I would like to use them in a book i am writing about EMS members of which i am one. I was also one of the paramedics on scene at the Cafe Zurich explosion and along with a plice officer the last one out of the building, so if anybody can assist me i would be greatful. I can be contacted at stevenwebb2@yahoo.co.uk

Interesting that in your nostalgia none of you remember the brutal killings by the aparthied regime...what shall we call that...white blight, or is that too mild? Things may be far from perfect in SA but at least its not a mass scale massacre and mindless opression. Sadly, I am probably wasting my time writing this- it will either be 'moderated' or fall in deaf ears and rusted minds.

it looks very .........African,i remember years ago visiting Port st Johns and seeing the same kind of decay!!,its the african way,they want what the european had built,and then they let it go to ruin,due to many reasons ,to long to go into now,i just thank God i dont live there anymore, i'm in the lovely western cape now,but i am starting to see more and more black faces here as well,suppose it is just a matter of time before the cancer spreads to this part of the world....hope and think unlikely though!!God help us!!!

EX SAP and JHBG Traffic Cop It breaks my heart to see Jhbg in this state.

As a Xhosa, you will hear it directly from my mouth;


Yes, we wanted apartheid abolished, but what we DID NOT want was ignorant, communist criminals running after apartheid's demise! I have never been more miserable in my life! I must escape this country! This continent!

White SA people should be given refuge in whatever country they choose. No visa issues etc.

Notice the western liberal media avoids the brutal truth that any country run by blax fails?

Oh It's so sad to see, I used to hang out at Cafe Wien and loved every coffee I had there. Let us not blame everything on our black guys. Why do you think it's now called "Little Lagos" Instead blame the system for allowing Nigerians to over run it with drugs, prostitution and organized crime.

I worked in Hillbrow and enjoyed spending evenings there eating out and taking in the cosmopolitan feel. In those days you could go there quite safely.

Exactly what I foresaw has manifested.

Africa has come to town.

Glad to be out of the country.

Atlas shrugged..... Looks like the Chinese will be the new colonial power on the continent. Between the corruption, mismanagement and infighting the place is doomed and ripe for fresh colonization.

A country run by 'blax' fails? Is that what's happening to USA too?Really?After all Mr Obama isn't 'white'#MayGodHaveMercyOnYou

I am looking for Irene Friedman who worked at the Cafe Kranzler in Hillbrow.Can anybody help, please?
Johan.